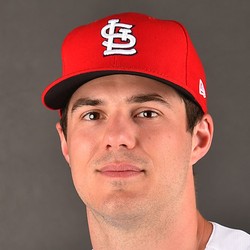 Dakota Hudson yields one run across four innings on Tuesday

Dakota Hudson allowed one run on two hits and one walk while striking out two across four innings in Tuesday's 6-3 Grapefruit League win over the Astros.

Hudson has allowed three runs on six hits while striking out seven across eight 2/3 innings in three appearances this spring. He had impressive 2019, owning a 16-7 record to go along with a 3.35 ERA. Despite the great ERA and record, his 4.93 FIP and 5.08 SIERA suggests that he was a little bit lucky last season. Hudson is currently the 127th pitcher on the consensus rankings and will look to build upon his strong 2019 campaign.