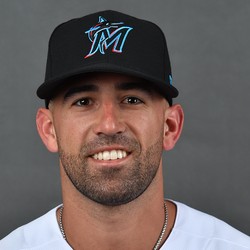 Deven Marrero with another strong performance vs the Blue Jays

Deven Marrero went 3-for-5 on Sunday vs the Blue Jays. He hit two singles, a double, with two RBIs, and three runs scored.

Marrero produced well for the Red Sox's in the Blue Jays series. He hit over .400 and extended his hitting streak to six games. Marrero's not a fantasy option by any means, but its nice to see some production out of a Red Sox's third baseman.