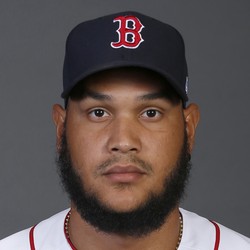 Other than finally staying (almost entirely) healthy, Rodriguez didn't make many gains in 2019. His ERA remained in the high-3.00s, his WHIP and walk rate were career worsts, and his strikeout rate dipped. His 19 wins mask what was an otherwise mediocre season. There's plenty of room for Rodriguez on a fantasy staff. But not at the front end.

"E-Rod" slipped on the mound on Wednesday and tweaked his knee. He'll now throw on the back fields on Monday instead. The Red Sox don't think it is a major concern. The plan is for Rodriguez to start a Grapefruit League game by the end of next week.