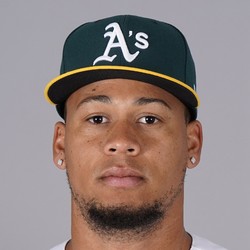 Montas was one of the best starters in baseball until his season ended prematurely thanks to a PED suspension. Before then, he had used added velocity and improved control to lower is ERA to 2.63 and tally nine wins in just 16 starts. There's always a question of how a player coming off a PED suspension will perform the following year but, for the most part, they are often able to maintain much of their performance. Draft Montas expecting solid overall numbers, though expect an ERA in the 3.00s, rather than the 2.00s.

Frankie Montas allowed one run on four hits and two walks while striking out six through six innings in Wednesday's 3-2 win over the Angels. He did not factor into the decision.

Montas made his first start in his return from an 80-game suspension. He allowed a homer in the second inning, but fired four scoreless frames to register the quality start. Montas showed no rust after such a long layoff, he finishes the season with a 9-2 record with a 2.63 ERA and 103 strikeouts through 96 innings.