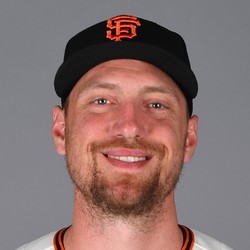 Free-agent outfielder Hunter Pence has agreed to a deal with the San Francisco Giants, according to a report from MLB insider Jon Heyman.

Pence batted .297 with 18 home runs in 83 games for the Rangers last season. Many expected that Pence, if he didn't retire, would stick in the American League, where he would be able to serve as a designated hitter on a regular basis. Instead, he appears to be headed back to San Francisco in what will likely be a reserve outfielder role.