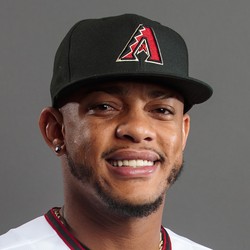 Marte suddenly went from being a career .263 hitter with 22 home runs in 1,548 plate appearances to batting .329 with 32 home runs in 628 plate appearances. And while he made many overall gains, such as a massive increase in launch angle, his expected batting average was just .299 and that .030 difference was 10th-highest in MLB. He also upped his pull percentage by a significant amount, and pulled all but one of his home runs, which should be something that pitchers can exploit in 2020. Buy some of the gains, but consider Marte closer to a .290-25 type of hitter.

Ketel Marte shut down for season

Ketel Marte has been diagnosed with a stress reaction in his back and will be shut down for the rest of the season.

Marte was removed from Tuesday's game due to a stiff back, and the team announced Friday that he'll be shut down for the year. He won't require surgery and is expected to be ready to go for the start of the 2020 season. He wraps up an incredible breakout season in which he batted .329 with 32 homers and 92 RBI.