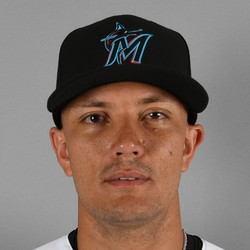 Miguel Rojas went 4-for-5 with three doubles, two RBI, two runs scored, and a stolen base in Thursday's 8-5 loss against the Nationals.

This was Rojas's second career four-hit game, and he was the main catalyst for all of the Marlins' scoring plays. Rojas has eight hits in his last 15 at-bats, though he's not a fantasy asset aside from the occasional stolen base.