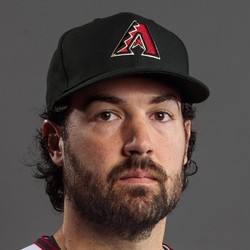 While the overall numbers fluctuate, Ray is largely the same guy he's always been. He's going to amass a ton of strikeouts and he's going to hand out free passes like a doctor handing out lollipops. It is just impossible to rely on a starter who can't top 175 innings or keep his WHIP below 1.33. Ray is certainly rosterable but close your eyes when he's pitching.

Robbie Ray gave up one earned run on three hits while striking out three in 4.0 innings while earning the win against the Rangers on Thursday.

Ray was solid in this one, striking out two batters in the first and only giving up three hits over four innings. His only blemish was a solo home run to Adolis Garcia in the bottom of the third inning. Ray put up a 4.34 ERA, 1.34 WHIP, and 235/84 K/BB ratio over 174.1 innings in 2019. The lefty has always had high strikeout upside (11.1 K/9 for his career) but it's gone hand-hand with a career 4.1 BB/9. If you can stomach his inconsistency and high walk rate he makes for a solid fourth or fifth starter in standard mixed leagues.