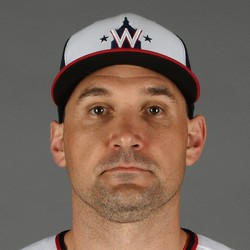 Ryan Zimmerman re-signs with Nationals for one year

The Washington Post reports the Nationals are re-signing Ryan Zimmerman on a one-year, $2 million contract.

Zimmerman, who has spent his entire career in Washington, clearly wanted to re-sign following the team's championship season. However, at this point in his career Zimmerman will likely serve as a platoon bat versus left handed pitching.