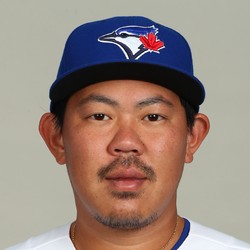 Shun Yamaguchi struggles through 2 1/3 innings in Grapefruit League action on Thursday, giving up five runs and three homers to the Phillies.

Yamaguchi has had a rough start to the spring and has a 12.00 ERA over three appearances. The 32-year-old is in a battle for the fifth spot in the Jays rotation but may end up in the bullpen to start the season.