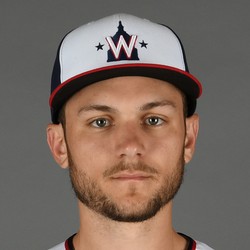 It just feels like there's a 60-steal season waiting in Turner's future, and you simply can't say that about too many other players in the game at this point. With stolen bases as a whole on the decline, Turner has an absolute floor of 40 (barring injury) and a much higher ceiling. Add to that the fact that he should help fantasy owners in three other categories and be neutral in the fourth (RBI), and he should be taken in the first round of all rotisserie leagues.

Trea Turner a candidate to bat third this season

Nationals manager Dave Martinez says Trea Turner is a candidate to hit third for the Nationals this year.

Turner is a pretty traditional leadoff hitter but the Nationals have a gaping hole in their lineup sans Anthony Rendon. If Turner ultimately hits third it could mean Victor Robles gets a chance to lead off, which would be big for his fantasy value.