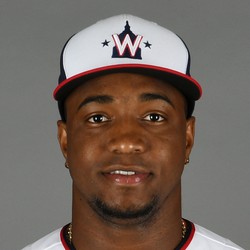 Robles did not help from a batting average standpoint but he is still young enough that progress can be expected. Where he did help, however, was on the basepaths with nearly 30 steals to go with 86 runs. He has sufficient power and should grow into more so his seventh-round ADP seems perfect.

Victor Robles not batting leadoff after all this season?

Nationals manager Dave Martinez spoke with reporters on Wednesday and hinted that he would like to keep Trea Turner and Adam Eaton together at the top of the Washington lineup, with Soto batting third. This would mean that Victor Robles, who had been getting a look at batting leadoff, would drop back down in the order.

Robles owners in fantasy have been hoping for weeks for the team to announce him as the leadoff batter, as it would mean more at-bats and, seemingly, more hits, runs, and stolen bases. A drop down in the batting order is not ideal, but he will still likely see plenty of green lights on the base paths.