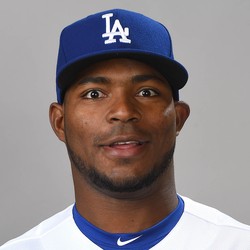 Puig may not be signed yet but it is inevitable that he will be end up starting every day for some new team and when he does, you can bank on 20+ homers, 15+ steals and a .260+ batting average as he always seems to give us.

Yasiel Puig: Giants still interested in signing the veteran OF

The Giants are interested in signing OF Yasiel Puig as soon as the freeze is lifted, per Jim Bowden of the Athletic.

Puig was drawing interest from the Giants back in April as the team was looking to add outfield depth. He has unable to latch onto a team this off-season and was reportedly looking to secure a long-term deal. With the universal DH now in play for 2020, the Giants could potentially sign Puig to a lucrative one-year contract. The 29-year-old slashed .267/.327/.458 with 24 homers, 84 RBI, 76 runs and 19 stolen bases across 149 games for the Red/Indians in 2019. Puig is currently 52nd among all outfielders in the latest expert consensus rankings.