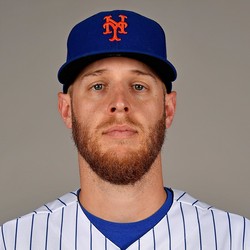 Wheeler's numbers declined from his breakout 2018 season but, overall, there were plenty of gains. He upped his strikeout rate and velocity, cut his walk rate, and set a career high in innings. Now with the Phillies, he'll see a downgrade in park, but because he's been able to avoid home runs over the last two seasons, the move should not have too much of an impact. Wheeler probably won't develop into a fantasy ace, but he's, at worst, a strong third fantasy starter.

Phillies starter Zack Wheeler allowed one earned run on four hits and one walk while striking out six over four innings in Tuesday's win over the Minnesota Twins.

The Phillies are counting on Wheeler to help anchor their rotation after ace Aaron Nola in 2020 after the group largely struggled in 2019. Wheeler, for his part, struck out 195 batters over 195 1/3 innings while pitching to a 3.96 ERA. If he can throw that many quality innings for the Phillies in 2020, they will be happy with the early returns on their five-year, $118 million investment.