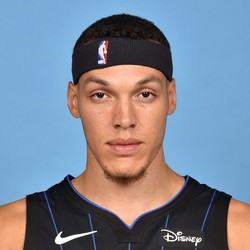 According to NBA scouts, two conclusions have been reached on Magic F Aaron Gordon: One - he plays out of position as a Small Forward, and Two - he tries too many things outside of his skillset.

As Magic beat writer for The Athletic Josh Robbins writes, “when Gordon tries to do too much, such as over-dribbling or taking high-difficulty shots, his efficiency and the team’s efficiency suffer. But when Gordon plays under control, his value to the team increases.” He’s a very solid player, but NBA scouts don’t see him as a superstar or even a second-fiddle to a superstar. “Would I like him on my team?” asked a second NBA scout. “Yeah, if you have three other guys who are better than him. That’s my big picture on him.” Gordon is also somewhat position-less. At 6-foot-9, he’s got the size and body type to be a PF, but all too often he tries to handle the rock like a guard or small forward. He spends too much time dribbling and trying to create when he could be better suited working off the ball, cutting, setting screens, and operating as a bigger, more athletic 4-man. One scout said, “he’s an around-the-basket guy. He’s a very good defender. He can put the ball on the floor and do some things. He just can’t make a shot consistently.” On the season, Gordon has averaged 14.4 points, 7.6 rebounds, 3.7 assists, 0.9 steals, and 0.6 blocks in 33 minutes per game. The Orlando Magic are currently cemented as the eighth-seed in the Eastern Conference and could be playing on their home turf in Walt Disney World should the NBA decide to resume play at ESPN Wide World of Sports, as has been widely reported.

Aaron Gordon scored eight points on 3-for-8 shooting with seven boards, nine assists, one block and one steal in 32 minutes of a 120-115 win against Memphis on Tuesday.

Gordon struggled with his shot on Tuesday but was able to help fantasy owners with his rebounding and assist totals. The 24-year-old forward is averaging 15.4 points, 9.1 rebounds and 6.8 assists over nine games since the All-Star break and should be owned in most fantasy leagues.

Aaron Gordon scored 19 points on 7-for-17 shooting with 10 rebounds, four assists, three steals, two blocks and a three-pointer over 36 minutes as the Magic defeated the Rockets on Sunday night.

Gordon picked up his second straight double-double and has been hot since the All-Star break. Over his last eight games, Gordon is averaging 16.4 points, 9.4 rebounds, 6.5 assists, 1.4 steals, and 1.4 blocks and should be added in all fantasy leagues.

Aaron Gordon scored 15 points on 6-for-15 shooting with 10 rebounds, four assists, one steal, and one block in 37 minutes during Friday's 132-118 victory over the Timberwolves.

Gordon recorded his fifth double-double in his last seven games and since the All-Star break is averaging 16.0 points, 9.3 rebounds and 6.9 assists over 38.8 minutes a game. Gordon is worth grabbing in all fantasy leagues.

Right knee tendinitis forced the high-flying forward to sit out Monday's game against the Blazers, but has been cleared to play Wednesday night in Miami. Gordon has been playing well as of late, averaging 19.5 points, 9.5 rebounds and 6.8 assists while recording a triple-double over his last seven games.

Alex Burns17 weeks ago
Should I Trade...?
Do Not Sell
Are you looking to contact Customer Support about a subscription or account related question?
Yes
No, I'm a California resident looking for the California Consumer Privacy Act form