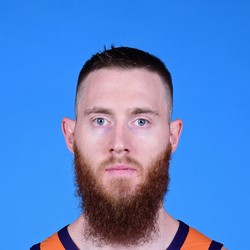 This was a let down game for those who streamed Baynes or played him in any DFS tournaments. It was his fewest field goal attempts over the last three games and his shots just weren't falling. His value will dry up as the Suns have three days off before their next game and Deandre Ayton will surely return to the starting lineup by then. He's not worth holding on to in standard leagues.

Baynes is making the most of his opportunity with Deandre Ayton out with an ankle sprain. His season got off to a similar start when he was filling in for Ayton, who was serving a 25-game suspension. If you streamed Baynes the last two games you're feeling pretty good about yourself but it's not built to last. The party will come to end as soon as Ayton returns to the lineup and that could come as early as Tuesday. Baynes will still be there to spell Ayton but his contributions will be limited.

Baynes seems to do this every once in a while, where he'll shoot lights out from three and is completely unstoppable. Tonight was one of those nights, as he put up a monstrous double-double, scoring a career-high 37 points and pulling down 16 rebounds in a winning effort. His counterpart, Hassan Whiteside, also put up a monstrous double-double, scoring 23, grabbing 20 boards, and blocking four shots, but it wasn't enough to stave off King Baynes. The last time Baynes even went over double-figures in scoring was back on January 3 against the Knicks, so you can tell it's been an up-and-down statistical year for him. He certainly earned himself more minutes from this one, and with Deandre Ayton ailing, look for Baynes to continue to start in his place. He should be picked up in all leagues at least while Ayton is out.

Baynes hasn't had a fantasy relevant game since January 3rd when he dropped 20 points and hauled in 12 boards in a win over the Knicks. A series of ailments kept him out of games the latter half of January until February 21st so it will take him some time to get his feet under him. His 16 minutes tonight were the most he's logged since the 12th of January. His current role is to spell Deandre Ayton so he can be kept on the waiver wire for now but he's worth adding to your watchlist.

Baynes has missed the last 11 games due to a sore hip. There is no timetable for his return and he is currently day-to-day. His next chance to return will be Wedneday's tilt against the Warriors.