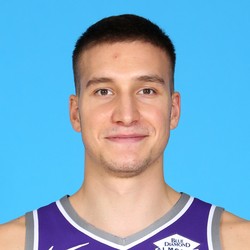 The Kings tied a single-game record for three-pointers. Bogdanovic played a key role in tying the record by burying a season-high seven triples in Saturday's win. He has been on a roll lately, averaging 19.0 points, 3.0 rebounds, 4.3 assists, 2.0 steals and 3.8 triples over his last four contests. Bogdanovic should be owned in all league formats. The Kings are currently in the hunt for the eighth seed, Bogdanovic will look to keep up his strong play in Sunday's tilt against the Raptors.

Bogdanovic continues to average points in the low teens and still registers a fair amount of treys per game, but his fantasy value still rides solely on his ability to score points since he doesn't do much statistically in any other part of his game most nights. That's why he's still a safer play in deep fantasy leagues than in regular ones and is still only a recommended fill-in starter option in regular leagues.

Bogdanovic topped 20 points for the first time in the last five games Tuesday. He doesn't add much in rebounds or assists, so if he isn't scoring he isn't doing much for your fantasy lineup. His next game comes Thursday against the 76ers.

It as a solid night for Bogdanovic who, despite failing to register an assist, rebound or block, managed four steals to bolster the final line. The Serbian guard has averaged almost identical numbers to those he put up last season, boasting averages of 14.2 points, 3.2 boards, 3.1 assists and 1.0 steals across 28.3 minutes per contest. He has fringe value in 12-team leagues thanks to his starting role with Sacramento.

The five points scored match Bogdanovic's lowest total of the month. He struggled to drain anything against the Grizzlies' energetic defense but managed to salvage his fantasy output with eight rebounds and four assists. Bogdanovic started all 11 games this month and that new duty didn't fare well for his fantasy value as he saw a drop in points, rebounds, and assists. He will finish February averaging 13.0 points, 3.5 rebounds, 2.5 assists, 1.0 steal, and 0.2 blocks.