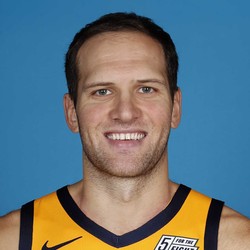 Bogdanovic exploded for 32 points on Saturday against the Pistons and then followed that performance up with Monday's dud. That seems to be the trend for Bogdanovic this March and he's scored 28, 23, 8, 32, and 5 points over five outings. That has all evened out to a healthy 19.2 points, 4.2 rebounds, and 2.4 assists but the inconsistency is frustrating, especially in DFS. The sixth-year small forward is a great basketball and fantasy player, but his penchant for randomly disappearing in games makes him a risky DFS play.

After shooting a woeful 22 percent from the floor in Friday's loss against Boston, Bogdanovic bounced back by shooting a terrific 67 percent in Saturday's win. He has scored at least 23 points in three of his last four games in March. Bogdanovic is averaging 22.8, 5.0 rebounds, 2.5 assists and 3.0 triples during the month. The 30-year-old will look to keep things rolling in Monday's tilt against the Raptors.

Bogdanovic tied teammate Donovan Mitchell for the team-lead with 23 points, once again displaying his importance to the club. He often gets overlooked on a team featuring two All-Stars, despite ranking 25th in points per game, 13th in three-point percentage, and 6th in free throw percentage. However, scoring is his main calling card, as he does not do much in the way of rebounds and assists. The Jazz's next opponent on Friday, the Celtics, did hold him to three points just one week ago.

After an uncharacteristically tough shooting month of February, Bogdanovic kicked off the Jazz's first game of March with a strong performance. He even hit a season-best six assists, with a highlight pass between the legs of a Cleveland defender and into the hands of teammate Rudy Gobert for an easy bucket. Bogdanovic should have another opportunity to feast on an inferior team this Wednesday against the Knicks.

Bogdanovic finally broke the 20 point plateau for the first time in the past five games. He rarely offers much in peripheral stats and his unpredictable scoring makes him undesirable in most fantasy formats.