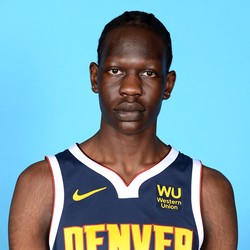 Bol recorded a double-double in just 20 minutes of play. Fortunately, the Nuggets have the depth in the NBA to allow Bol to rehab and refine his game in the minors. A dynasty stash, for now, but when his time comes to make an impact in the NBA he should have no problems stuffing the stat sheet.

2019 Nuggets draft pick Bol Bol has not been approved for preseason action.

The tall man is taking it easy in teams of rehabbing from a foot injury. He likely won't be at full strength yet, and his playing time will be limited when he returns, whenever that is. He is not an effective fantasy commodity to begin the season.

2019 Nuggets draft pick Bol Bol is slowly working his way towards full health after a foot injury slowed him down during his last year of college at Oregon.

The center has the capacity to have a big role on the Nuggets, but likely not now. He has a two-way contract, and that limits his ability to play a huge role for the team. He's not a fantasy worthy acquisition at the moment.

Bol Bol has agreed to a two-way deal with the Denver Nuggets, Shams Charania reports.

The big man fell to the 44th pick in this year’s draft and wasn’t able to secure a true deal with Denver. Instead, he’ll play most of his rookie season in the G-League, leaving him irrelevant in redraft formats and merely a dynasty bench stash at this time.

Bol Bol recently confirmed that he is now fully recovered from the navicular bone fracture. He also stated that he has been working out twice a day. Despite the good news, the Nuggets are strongly expected to be cautious with the big man this season.

Bol Bol is on the verge of signing a two-way deal, meaning that he would mostly play in the G-League to start his professional career. As a result, he should not be considered on draft day.