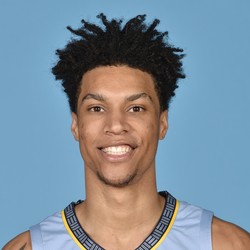 Clarke followed up his appearance in Saturday's Rising Stars game with a solid performance off the bench on Thursday, posting an identical statline to starting center Jonas Valanciunas but adding a couple of blocks and a better plus/minus. Right now the only thing limiting Clarke's value is Valanciunas and Jaren Jackson Jr. having a stronghold on starting duties. The rookie out of Gonzaga has failed to crack more than 23.3 minutes per game in a month this season but is still worth a roster spot in all leagues. He's averaging 12.3 points, 5.9 rebounds, 1.4 assists, 0.9 blocks, and 0.5 steals.

Clarke is buried on the depth chart behind Jaren Jackson Jr. and Jonas Valanciunas but continues to prove his worth throughout his unexpectedly great rookie season. The Gonzaga forward is having a solid start to February by averaging 13.8 points, 5.6 rebounds, 1.0 assists, 0.8 blocks, and 0.6 steals over five games. The craziest part about that statline is that he's doing it in only 22.6 minutes. It's rare to campaign for a fantasy player with this little playing time, but Clarke has proven night after night that he will take full advantage of any opportunity he receives. Clarke, born in Canada, will suit up for Team World in this weekend's Rising Stars game and face off against Team USA, led by fellow Grizzlies Ja Morant and Jackson Jr.

Clarke bounced back from his poor performance against the Pistons on Monday, to return to his mid-season form. He continues to feast on the second unit. The recent trade for Justice Winslow shouldn't impact his numbers going forward.

Brandon Clarke struggled to find his shot last night, scoring four points on 2-of-7. He was able to grab five rebounds and recorded both a block and a steal throughout his 23 minutes off the bench.

Even though he's averaging 12 points per game, Clarke has scored single-digits in seven of 15 games since January 1st. His designation off the bench limit his minutes and make his scoring outputs pretty volatile. The rookie forward has shown great potential but will be tough to rely on every night being behind Jaren jackson Jr. on the depth chart.

Brandon Clarke is not listed on the injury report ahead of Monday's game against the Pistons.

Clarke missed Friday's game against the Pelicans due to a hip injury. He was removed from Monday's injury report and is expected to play. Fantasy owners can safely insert him into their starting lineups. Clarke is averaging 12.2 points, 5.8 rebounds, 1.5 assists, 0.5 steals and 0.9 blocks across 42 games this season.