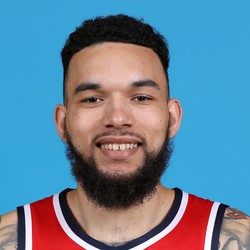 Chiozza has come out of nowhere and provided the Nets with solid minutes off the bench at the point guard position. He’s averaging 11.6 points in 22 minutes per game in his last three games after playing extremely sparingly for Brooklyn throughout the season. He’s certainly earned himself a spot in Coach Kenny Atkinson’s rotation, however, he’s still best left on the waiver wire in most leagues at this point.

Chris Chiozza got some extra playing time as Spencer Dinwiddie had an off scoring night and the Nets were getting blown out. Chiozza has performed well when called upon in his last couple of games. Fantasy owners can place him on the watch list for now to see if his recent play will develop into more minutes going forward.

Chiozza was signed to a two-way deal with Brooklyn back in January to be a true backup point guard to Spencer Dinwiddie. He hasn’t seen the floor much at all until the 2nd half of the game tonight against Boston. Chiozza, along with bench guys Rodions Kurucs, Timothe Luwawu-Cabarrot and DeAndre Jordan, played the entire 4th quarter and overtime to carry the Nets back from a large 2nd half deficit to beat the Celtics. Caris LeVert, who became white-hot in the 4th quarter, was the news story of the night with a career-high 51 points, but Chiozza was a big reason for his success. Per Nets beat writer Alex Schiffer, when asked by reporters about LeVert’s big game, Chiozza said “let me bring the ball up, and you’ve got to score, when you get to your spot, you just put your hands up, and I’ll get you the ball.” Chiozza led the team with a +/- of +29 tonight. We wouldn’t rush to the waiver wire to pick him up, but he’s certainly earned some more respect from his coaches and teammates after this one.

Chiozza was surprisingly effective in his very brief time on the court Monday, though he's been an afterthought since arriving in Brooklyn from Washington. Across the Nets' last nine games, the second-year guard has only totaled 14 minutes.

Although not very relevant from a fantasy perspective, the rookie point guard had perhaps the best game of his young career on Sunday night. Chiozza continues to see a decent allotment of minutes in the wake of Isaiah Thomas' (left calf strain) injury. He should, however, remain on waivers in all leagues. Chiozza and the Wizards will host the Hornets on Tuesday.