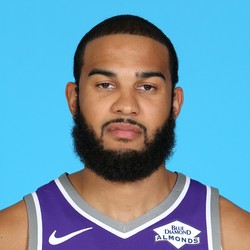 Cory Joseph (heel) is probable for Thursday's game against the Sixers.

Despite dealing with a heel injury as of late, Joseph has yet to miss a game and is expected to suit up Thursday. He can be used as a streamer and should be owned in deep-league formats. Joseph is averaging 6.5 points, 2.6 rebounds, 3.4 assists, 0.7 steals and 0.8 triples across 61 games this season.

It was a solid bench performance for Joseph and his highest scoring output since late January. Still, unless he can consistently put up these types of performances, he's best left on waivers in most fantasy leagues.

Cory Joseph is active for Sunday's matchup against the Pistons.

Joseph injured his heel on Friday and was listed as questionable for Sunday's matchup. He took the court in pregame shootaround grimacing in pain and walking gingerly but the team decided to play him anyway. Be prepared for a full dose of De'Aaron Fox as he looked healthy during the pregame warmups and was also cleared to play. Yogi Feerrell should crack the rotation if Joseph's minutes are limited but holds little fantasy value. Needless to say, Joseph is a risky play for Sunday.

Joseph drew the start with De’Aaron Fox sidelined, and the former provided a solid fantasy line despite the lack of scoring. He’s been inconsistent in the starting five this season, though he makes a worthy deep-league play for those in need of assists, and his rock-bottom price in daily formats gives him some dart-throw appeal for as long as Fox is out.

Corey Joseph put up six points (3-7 FG, 0-1 3Pt), nine assists, and, two steals Thursday night against the Thunder while filling in for De’Aaron Fox in the starting lineup.

The assists are nice, but Joseph didn’t complement that assist total with much of anything else. Joseph figures to see a decent increase in minutes as long as Fox is out, but despite the assists tonight, his track record suggests he’s not likely to be of much use except to the most guard-needy of teams.