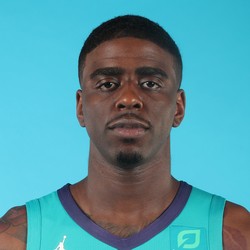 Dwayne Bacon provided two points (2-2 FT) and a rebound over 11 minutes in the Hornets’ 125-110 loss to the Rockets on Tuesday.

Bacon continues to play a small role off the bench for Charlotte, making minimal contributions across te stat sheet in his third NBA season. He’s averaging 6.0 points, 2.5 rebounds and 1.4 assists across 17.9 minutes and doesn’t need to be rostered outside the deepest of leagues.

Bacon was a no show to during this past Monday’s match-up against the Magic, as he was unable to get anything going scoring zero points on a total of four shots taken from the field and one from beyond the arc. This outing marks the second time in four games in which he has scored zero points, and unfortunately, is consistent with the kinds of performances we are used to from Bacon this year. On the year he has averaged 6 points, 2.5 rebounds, and 1.4 assists. Given his sporadic volume of opportunities on the floor and his high consistency in putting forth low floor games, Bacon should be avoided in year-long league play and reserved as a last resort Hail Mary dart throw on daily sites, primarily small slates.

Joel E. Ruffin Jr.16 weeks ago
Dwayne Bacon a non-factor in win against the Knicks

Bacon, for the third game in a row, put up another forgettable statistical night. Although Bacon is having his second-best statistical month this season, his body of work this year has been mired by low volume shooting nights and underwhelming peripheral contributions that have failed to add to or detract from the play of the Hornets. Despite the rare offensive outburst, Bacon should remain out of your lineup.

In 24 minutes of play, Bacon was unable to contribute much-needed production off the bench in the loss to the Nuggets. Although Bacon is capable of providing game-winning stat lines for the Hornets, his potential was not on display this past Wednesday. Unfortunately, Bacon has produced more of these low-floor games than not. For fantasy purposes, it would be best to keep Bacon out of your line-up until he shows that he can consistently perform at a higher level.

Bacon scored double figures for only the second time in his last six games. He is averaging 11.2 points, 3.7 rebounds, 1.5 assists and 1.0 triples during that span. Bacon is worth owning in deep-league formats until he starts producing at consistent rate. The Hornets next scheduled game is Monday, away against the Trail Blazers.