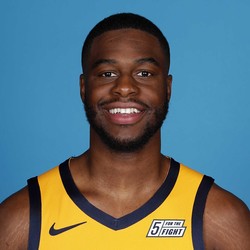 Emmanuel Mudiay (ankle) is listed as probable for Monday's game against Houston.

Mudiay missed Saturday's game due to a sprained ankle. He will return in usual role off the bench. Mudiay is averaging 7.6 points, 2.5 rebounds, 2.5 assists and 0.6 triples across 41 games this year.

Mudiay provided some quality stats Sunday in his first start of the season, while filling in for Donovan Mitchell (illness). The former has been on a role as of late and deserves some consideration in 12-team leagues for as long as Mike Conley remains out.

Mudiay made his presence felt in this one but he's still not going to get enough playing time night in and night out to warrant a roster spot in fantasy leagues. All fantasy owners should consider this performance as a rarity.

This is Mudiay's second game in his last four contests in where he's scored points in the double-digits. He's still not getting enough minutes to be able to put up fantasy relevant numbers on a consistent basis, though, so he's still not worth considering in any type of fantasy league moving forward.

Mudiay had a nice game for the Jazz but his playing time is still very limited thanks to his tail-end bench role. He still isn't a player to consider even in the deepest of fantasy leagues.