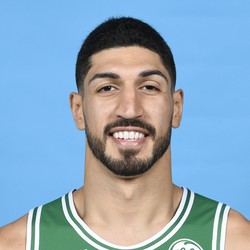 Enes Kanter has been ruled out of Friday's matchup with the Magic due to a hip injury.

With Robert Wiliams (hip) also out and Jayson Tatum (groin) questionable, expect Daniel Theis to handle all the minutes he can in the frontcourt.

Zachary HanshewJan 24, 2020
Enes Kanter hurts his foot during win over the Grizzlies

Kanter had another solid game before leaving with the injury scoring 13 points with eight rebounds, three assists and one block in 19 minutes. The injury does not appear to be serious but fantasy owners should keep an eye on updates to see if the veteran big man will need to sit on Friday when the team plays the Magic.

Kanter saw an uptick in minutes on Monday as the veteran center is averaging just 20 minutes a game in January. Kanter is averaging 9.4 points and 8.2 rebounds on the season and is worth owning in 14 team fantasy leagues and deeper.

Enes Kanter scored eight points on 3-for-5 shooting with five rebounds, one assist and one block over 19 minutes as the Celtics lost to the Suns on Sunday night.

Kanter has seen his minutes drop averaging just 17 over the last three games. The veteran center has had a hard time finding a consistent role this season and is more of a 14 team league and deeper own for fantasy owners.

Enes Kanter scored nine points on 4-for-6 shooting with two blocks and one rebound over 16 minutes as the Celtics lost to the Bucks by a 128-123 score.

Kanter has seen just 16 minutes of playing time in each of his last two games. The veteran big man has not been able to get consistent playing time this year which hurts his fantasy value and makes him more of a 14 team and deeper own for fantasy owners.