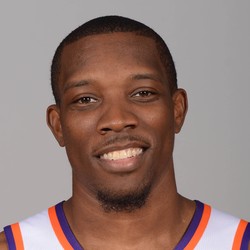 Eric Bledsoe (knee) practiced today and is expected to play on Thursday against the Celtics.

Bledsoe has a lingering knee issue, but he’s been able to play through the pain recently. If for some reason he can’t suit up, look for Donte DiVincenzo to potentially enter into the starting lineup.

Eric Bledsoe (knee) is listed as doubtful for Monday’s game against the Nuggets.

Bledsoe is dealing with swelling in his knee and is listed as doubtful for Monday’s tilt against Denver. If Bledsoe is ruled out, look for Donte DiVicenzo to see an expanded role.

Bledsoe once again saw his scoring increase with Giannis Antetokounmpo sidelined. He should be in line for a similar role Monday against the Nuggets as Antetokounmpo has already been ruled out. Bledsoe should be slotted into fantasy lineups in all formats.

Bledsoe has been well below his season average scoring lately. He's put up just 9.0 points per game over his last five compared to his 15.2 point average on the season. He hasn't been getting it done in peripheral stats either and doesn't need to be considered a must-play at this point, though a big game against his former team Sunday isn't out of the question.

Bledsoe saw more minutes and put up his best stats in over a week Wednesday. He'll look to fill up the stat sheet again Friday in a big showdown with the Lakers in Los Angeles.