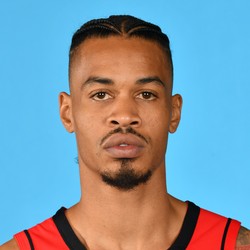 Green had surgery on his broken left foot and will miss approximately six months while rehabbing.

That means he's unlikely to see the court in 2019-20. Green's departure from the lineup probably won't move the needle much on guys like Eric Gordon and Danuel House, who already had established roles coming into the season.

Gerald Green put in nine points, three steals and one rebound in 20 minutes of game action on Sunday.

Green went just 2-for-9 from deep during the win and remains a no-go in standard fantasy leagues.

Gerald Green scored 11 points to go with seven rebounds, one dime and one steal in 22 minutes of game action on Sunday.

Green shot 10+ times from the field for the second straight game but really struggled on Sunday, hitting just three of his 13 attempts. Nonetheless, Green has drained 3.0 triples per game over his past three contests.

Gerald green went 5-of-8 (62.5%) from the field and 4-of-7 (57.1%) from three point range, while adding three rebounds and one block in Tuesday night's win over the Raptors in Toronto.

Green had the second-highest scoring output for the Rockets to help them defeat the Raptors and move into third place in the West. Green has the occasional scoring outburst, but they are impossible to predict. He will continue to be an avoid in DFS unless an injury thrusts him into a larger role.

Gerald Green had a nice performance in the Rockets 120-104 win over the Mavericks. Green finished with 19 points on 7-for-12 shooting from the field (5-for-8 from behind the arc). He also added six rebounds and one assist in his 22 minutes of game action.

Green is not a consistent fantasy option but he can provide nice fantasy outings off the bench. He has been trading off good performances with mediocre ones over the last six games. He is a streamer option at best.