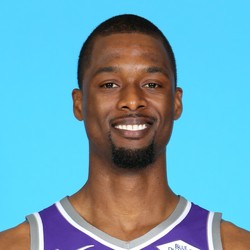 Barnes played a key role in helping the Kings tie a team record for three-pointers by burying five triples in Saturday's win. He has scored double figures in four consecutive games during the month of March. The Kings are making a late-season push for the playoffs, and Barnes perimeter scoring has helped play a keep part for the team's run towards an eighth seed. The 27-year old is having a solid season, averaging 14.8 points, 4.8 rebounds, 2.4 assists and 1.5 triples across 63 games this year. The Kings next scheduled game is Sunday, home against the Raptors.

Barnes, as usual, was efficient and effective in 37 minutes tonight. He only turned the ball over once tonight, which is par for the course for Barnes, who only averages 1.3 per game on the year. He has the ability to light it up on occasion for the Kings, however he won’t do that on most nights, but he will post solid points, rebounds and assists with efficient shooting percentages. One deficiency for Barnes this season and throughout his career has been on the defensive side of the ball, and that showed tonight as he didn’t record a steal or a block in 37 minutes of action.

Barnes plays solid minutes for the Kings but simply doesn't see enough usage to warrant fantasy consideration. It should only get worse for Barnes as Marvin Bagley and Richaun Holmes get closer to returning.

Such is the duality of Barnes; leading the team in scoring for two consecutive outings and then following it up with a seven point performance. Over 11 games this month Barnes recorded at least 20 points in five games and single digits in four. When Barnes takes the court and finds his stroke early he's nearly unstoppable, but as shown in last night's outing that isn't always the case. Only averaging 4.6 rebounds and 2.3 assists per game, most of Barnes's fantasy value in the past has been from his ability to score, but the 14.9 points he's averaging this season is the worst since the 2015-16 season with the Warriors. He'll finish February with 15.7 points, 4.3 rebounds, 3.3 assists, 0.5 steals, and 0.2 blocks.

Barnes scored 21 points for the second consecutive night as he's enjoying a bounceback in production after an ice-cold December and January, during which he averaged 13.4 points over 30 games. Disregarding Barnes's two-point performance on February 1st, he is averaging 18.2 points, 4.1 rebounds, 3.8 assists, and 0.4 steals over nine games this month. His value has slid in DFS and he's a solid target as he rides a mini hot streak right now. He'll get a chance to lead the team in scoring again with a quick turnaround in Friday's matchup against the Grizzlies.