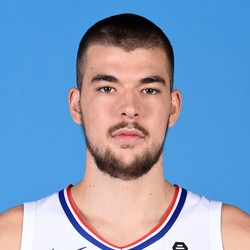 Obviously the shot attempts weren't there for Zubac tonight but he was able to salvage some value with 12 boards. He's really only worth a roster spot in the deepest of leagues as he doesn't score or block shots on a consistent basis.

Zubac had his way early against a Houston team that runs out 6’7” Robert Covington as its center. The 7-footer recorded a double-double tonight for the first time since January 14. Zubac hasn’t put up the best numbers in 9-cat leagues, however, his 60 percent shooting, seven rebounds, and 0.9 blocks per game continue to be enough for most fantasy owners in 12-team leagues to roster him.

Zubac plays a true old-school center role for the Clippers, only recording double-digit shot attempts twice this entire season. He clogs the paint and grabs rebounds, but unfortunately that doesn't elicit much fantasy relevance. Zubac is averaging 8.0 points, 7.2 rebounds, 1.1 assists, 1.0 block, and 0.2 steals over 17.9 minutes per game this season. Still owned in about a quarter of leagues, there's no reason to hold onto him any longer.

Zubac hauled in 15 boards and fell two points shy of a double-double. Doc Rivers inexplicably only gave him 20 minutes, which has become par for the course. He's only scored in the double-digits once in the last ten games and the lack of consistency with his playing time keeps him off the fantasy radar.

Ivica Zubac produced 11 points (5-6 FG, 1-2 FT) and chipped in six rebounds and two assists over 15 minutes as the Clippers were defeated by the Hawks 102-95 on Wednesday.

Virtually all of Zubac's production came in the first half before Coach Doc Rivers pulled him with eight minutes remaining in third quarter. It was an odd move considering the Clippers were shorthanded, lacking size, and Zubac was playing well up to that point. He's become impossible to trust for fantasy purposes due to inconsistent minutes. Most of his fantasy value comes from rebounds and blocks and he just can't contribute meaningful if he's averaging under 18 minutes a night.

Jon Mathisen24 weeks ago
Should I Trade...?
Do Not Sell
Are you looking to contact Customer Support about a subscription or account related question?
Yes
No, I'm a California resident looking for the California Consumer Privacy Act form