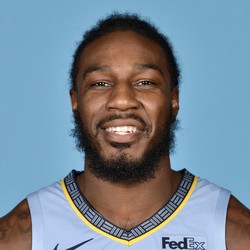 Crowder was two points shy of recording his second double-double of the season. He had missed Monday's win over the Wizards due to a concussion. Crowder has cooled down as of late, averaging 4.3 points, 5.7 rebounds, 3.7 assists, 1.0 steals and 1.0 blocks and 1.0 triples in his last three contests. He produces enough in other categories to be owned in all league formats. The NBA is currently suspended and it is unclear at this time when it will resume play.

Crowder missed Sunday's win over the Wizards due to a concussion. He will try to practice within the next few days, and is expected to play Wednesday's tilt against the Hornets. Fantasy owners should monitor his status closer to tip-off. Crowder is averaging 10.4 points, 6.0 rebounds, 2.6 assists, 1.1 steals and 1.9 triples across 57 games this season.

Jae Crowder (concussion) ruled out for Sunday’s game against the Wizards.

Crowder entered the concussion protocol on Saturday, and was ultimately ruled out for Sunday’s tilt. He originally suffered the concussion in Friday’s loss to the Pelicans when receiving a blow to the head. Look for Derrick Jones to see an uptick in minutes and usage with Crowder sidelined.

Jae Crowder exited Friday's 110-104 loss to the Pelicans and did not return. He finished with two points (1-4 FG, 0-3 3PT) two assists, two blocks and one turnover across 10 minutes before exiting.

Crowder suffered the injury 10 minutes into Friday's loss after receiving a blow to the head. He exited the game and did not return. The severity of the injury is unknown at this time, and Crowder is currently day-to-day. His next chance to return will be Sunday's tilt against the Wizards.

Jae Crowder scored 3 points (1-8FG, 1-8 3PT), while adding seven rebounds, four assists, one block and one steal across 32 minutes in the Heat's 116-113 win against the Magic on Wednesday night.

Crowder came into tonight’s game red-hot having shot 45 percent from downtown in his last ten games. This was not the case tonight as he only converted one of his eight three-pointers attempted. Luckily, he was able to provide some rebounds and assists to salvage his poor shooting performance. The Heat will next take on the Pelicans on Friday night.

Felipe Casanova18 weeks ago
Should I Trade...?
Do Not Sell
Are you looking to contact Customer Support about a subscription or account related question?
Yes
No, I'm a California resident looking for the California Consumer Privacy Act form