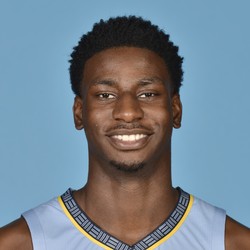 According to Memphis Grizzlies head coach Taylor Jenkins, F/C Jaren Jackson Jr. is "looking and feeling good" and is ready to rejoin his teammates in Orlando.

Jackson Jr. has been dealing with a knee sprain since late February and missed the past nine games for the Grizzlies as they held a 3.5 game lead over the Trail Blazers for the eighth-seed in the Western Conference. Much to the delight of Grizz fans, it appears as if Justice Winslow, Brandon Clarke, and Jaren Jackson Jr. will all be playing in Orlando. Jackson Jr. was enjoying a very productive sophomore campaign, averaging 16.9 points, 4.7 rebounds, 1.4 assists, 1.6 blocks, 0.7 steals and 2.5 three's in 28 minutes per game this season before the coronavirus pandemic haulted play.

Memphis Head Coach Taylor Jenkins told reporters on Wednesday that Jaren Jackson Jr. (knee) is “progressing in a positive direction” and could return to the court sometime next week.

JJJ’s original two-week timeframe on the sidelines comes up this weekend, so Jenkins’ words that he could be back next week seem to go right along with that. It’s been a team effort filling in for Jackson Jr., but it’s been Josh Jackson and Gorgui Dieng off the bench that have provided Memphis with some front court depth while both JJJ and Brandon Clarke (quad) have been out. Fantasy owners will want to deploy Jackson Jr. as usual when he returns from the injury.

Jaren Jackson Jr. will be reevaluated in two weeks after suffering a left knee sprain against the Lakers on Friday.

Jackson Jr. exited Friday's game with knee soreness and an MRI later revealed a sprain. This is a really tough blow for the Grizzlies as they are currently sitting three games up on Portland for the eighth-seed out West. The second-year forward is set to miss at least the next eight games before being reevaluated. The Grizzlies will likely turn to promising rookie Brandon Clarke after he started the second half on Friday and posted a double-double in 33 minutes. Clarke's value is currently trending upward and he will be a strong fantasy option as long as Jaren Jackson Jr. remains out.

Jackson Jr. has struggled in February as he's averaging 12.8 points, 5.2 rebounds, 1.8 blocks, and 1.7 assists. Normally relying on a heavy dosage of high-percentage shots, the second-year power forward has taken a lot of attempts from deep this month and is only shooting 36.8% from the field over six games. Jackson Jr. was able to salvage his scoring production on Thursday with 12 of his 16 points from from three-point range but he'll need to start attacking the basket and regaining confidence to hit his fantasy ceiling.

Jackson Jr. had to earn his scoring at the free line on Wednesday, where he scored five of his eight points. He bolstered his fantasy output with five rebounds and three blocks, but had an otherwise quiet night. Five games into February, Jackson Jr.'s numbers aren't looking quiet as good as they have throughout his exciting two-year career. He's averaging 12.2 points, 5.8 rebounds, 2.2 blocks, 1.6 assists, and 0.6 steals over those five contests. He cedes a lot of rebounds to the big-bodied Jonas Valanciunas and occasionally takes a backseat to rookie forward Brandon Clarke when he gets hot. The Michigan State product has no chance of losing his starting minutes and should still be in your fantasy lineup every night, but given the Grizzlies' depth in their frontcourt it might not be a bad idea to start tempering expectations for Jackson Jr. a bit.

Dave Kluge21 weeks ago
Should I Trade...?
Do Not Sell
Are you looking to contact Customer Support about a subscription or account related question?
Yes
No, I'm a California resident looking for the California Consumer Privacy Act form