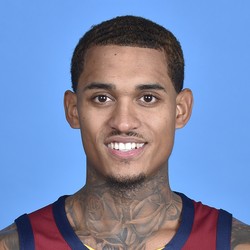 Clarkson is a pure scorer that brings little else to the table. When he shots are dropping, he's a great fantasy value. And when they aren't, he's essentially worthless. Over his last four outings he is shooting an ice-cold 4-of-20 from deep. Draining 36.8% from deep this year, you should expect a bounceback. The sixth-year guard is coming off a great February where he averaged 17.9 points and shot 42.6% from beyond the arc and should return to form soon.

Clarkson hasn't been at his best in two out of his last four contests. He's by no means a must-start in standard fantasy leagues at the moment, but he's still a viable one due to his now just over 15 points and just over 2.0 three-pointer per game averages on the season (his almost 50% field goal percentage on the year doesn't hurt either).

Monday's statline for Clarkson was a weird one as he failed to record an assist, steal, block, or free throw attempt. Being behind Donovan Mitchell on the depth chart will keep Clarkson's ceiling low but he's coming off a pretty solid February where he averaged 17.9 points, 3.8 rebounds, and 1.9 assists. Being a pure scorer, Clarkson brings little else to the table besides his point total. Given that and his role on the team, and he's a low-tier fantasy option even though he is 69th in scoring.

Clarkson has been a fairly reliable source of points off Utah's bench, scoring in double-digits in 12 of his last 13 games. He's worth inserting into fantasy lineups if you're desperate for some points in a pinch.

This was the first time Clarkson scored under double-digit points since late January. He's been a phenomenal bench player for the Jazz this season and should continue to get starts by his fantasy owners in all standard fantasy leagues.