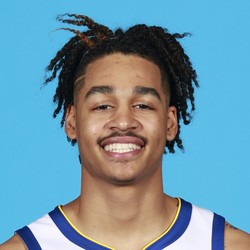 Jordan Poole shot 50% from the field and led the Warriors with a team-high 17 points (6-for-12 FG) (3-for-7 3PT) off the bench in a 124-97 loss to the Mavs. Poole also dished five assists and grabbed two rebounds across 28 minutes on Tuesday night.

Poole is averaging 15 points per game over his last two, while shooting 43% from deep. With the emergence of a lot of youth suddenly in Golden State, Poole isn't a bad option if you're in a deeper fantasy league format, as he continues to improve.

Jordan Poole managed five points (2-8 FG, 1-5 3Pt), three rebounds, three assists and a block across 17 minutes in the Warriors’ 114-95 win over the Grizzlies on Tuesday.

Poole came off the bench for his third game in a row after eight straight starts. In nine starts this season, he's averaged 10.8 points, 2.1 assists and 2.0 rebounds across 29.8 minutes per contest, though those numbers dip significantly in his non-starts. In six games off the bench, Poole has logged just 21.2 minutes per contest while averaging 4.8 points, 3.7 rebounds and 2.0 assists. The first-rounder was expected to see some quality minutes in this banged-up backcourt, but the production hasn't materialized with Alec Burks fixed in the starting lineup and the emergence of Ky Bowman.

The shot attempts are there, but the shooting slump continues for Poole. Sooner or later, he should be able to find his rhythm, but fantasy owners need to leave him on the waiver wire and continue monitoring him until he can show drastic improvements.

The volume is great to see, but the shooting isn't. The other issue is that he isn't doing too much else on the stat-sheet to warrant any serious consideration in fantasy, but continue keeping an eye on him throughout the season.

In only his second career start, Poole had himself a fine individual offensive performance and was second on the team in scoring behind D'Angelo Russell. With the myriad of injuries the Warriors are trying to navigate through, Poole will have to shoulder an even larger responsibility on the both ends of the court. He and the Warriors play again tomorrow against Charlotte.