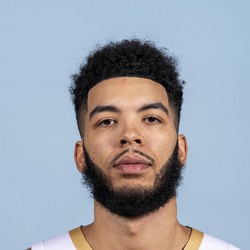 Kenrich Willams (back) will not play Thursday’s game against the Thunder.

Williams has missed the last 18 games due to a back injury. He is currently day-to-day. His next chance to return will be February 21st against the Trail Blazers after the All-Star break.

The New Orleans Pelicans on Twitter have listed Kenrich Williams as out for tomorrow’s game versus the Memphis Grizzlies. Williams has been out for 12 straight games due to soreness in his right lower back.

Leonard Grandio10 weeks ago
Kenrich Williams (back) ruled out Thursday

Kenrich Williams (back) is listed as out for Thursday's game against the Jazz.

Williams will miss fourth straight game due to a back injury. He is currently day-to-day. His next chance to return will be Saturday against the Clippers.

Brad Camara12 weeks ago
Kenrich Williams (ankle) out on Thursday

Kenrich Williams has been ruled out for Thursday's game versus the Suns with an ankle injury.

With Williams out, E'Twaun Moore and Josh Hart will be asked to step in and both are solid options in DFS. Hart is worth adding in season-long leagues if available.

Kenrich Williams will sit out Tuesday's matchup with the Mavs while dealing with a sprained right ankle.

It will be his second consecutive absence, though he has a chance to return Thursday against Phoenix. Expect JJ Redick to start at small forward, with Brandon Ingram sliding over to the four while Kenny Hustle is out.