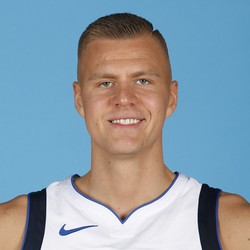 Kristaps Porzingis has been ruled out of Wednesday night's game against Denver for rest.

The Mavs are managing Porzingis on the second half of a back-to-back set on Wednesday. It may do him some good, as he's been mired in a shooting slump the last two games. Maxi Kleber and Willie Cauley-Stein could see more involvement Wednesday, while Porzingis should be back to action against the Suns on Saturday.

Porzingis has shot the ball dreadfully over his last two games, shooting 7-of-32 from the field and 1-of-13 from three-point range. He's sure to bust out of his shooting slump eventually and will look to do so Wednesday against the Nuggets.

Porzingis really struggled with his shot tonight, going just 3-17 from the field. This was a fluke game for Porzingis, who has been absolutely dominant in his last five games before tonight, averaging 30 points, 12.2 rebounds, and 3.6 blocks per game. He’ll look to get back on track Tuesday against the Spurs.

Kristaps Porzingis (ankle) has been cleared to play on Sunday against the Pacers.

After being listed as questionable entering Sunday with an ankle injury, the big-man is set to take the floor against the Pacers. This is great news for fantasy owners as Porzingis has been on a tear recently, averaging 32.7 points, 12.0 rebounds and nearly five blocks per game so far during the month of March.

Mike Peasley on Twitter is reporting that Dallas has listed Kristaps Porzingis as questionable for Sunday’s match-up with the Pacers due to a right ankle sprain.