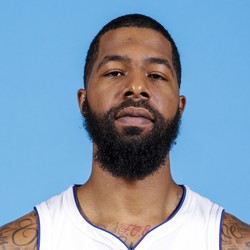 Markieff Morris recorded eight points (3-5 FG, 2-2 3PT), four rebounds, and one assist over 19 minutes off the bench in Thursday's 116-86 win over the Warriors.

Morris's role on the Lakers looks like it'll be significantly different than his role with the Pistons. Over two games Morris has averaged 17 minutes, 6.0 points, 2.5 rebounds, 0.5 assists, and 0.5 blocks per game. While it's a small sample size, it's tough to imagine much changing on this deep roster with Anthony Davis and Kyle Kuzma playing Morris's power forward position and ahead of him on the depth chart. In Detroit Morris was averaging 22.2 minutes and 8.6 field goal attempts per game but those days are over. Morris can be safely dropped in all formats as his ceiling has been lowered dramatically.

Lakers coach Frank Vogel told reporters that newly-acquired Forward Markieff Morris will be available for tonight’s game against the Pelicans.

Vogel also stated that he hasn’t decided if Morris will play, but if he does, it won’t be “a lot.” Morris may not get many minutes tonight, however, he should be a key piece in the Lakers rotation going forward. He’s a deep league stash at this juncture, but owners with an open roster spot might give him a look now before he starts producing.

Markieff Morris officially signed with the Lakers on Sunday.

It was reported on Friday that Morris planned to sign with the Lakers once his buyout was complete. He cleared waivers and officially signed with the Lakers on Sunday. In a corresponding move, the team waived DeMarcus Cousins. Morris' fantasy value takes a slight hit joining a loaded Lakers front-court, but is still worth owning in deep-league formats. The 30-year old is averaging 11.0 points, 3.9 rebounds, 1.6 assists, 0.6 steals and 1.7 triples across 44 games this season.

Markieff Morris is expected to sign with the Lakers.

Morris reached a buyout with the Pistons and is expected to sign with the Lakers. He will most likely come off the bench and backup starter Anthony Davis. With the move to LA, Morris becomes a fringe deep-league option at best. He averaged 11 points, 3.9 rebounds, 1.6 assists and 1.7 triples across 44 games for the Pistons this season.

Markieff Morris and the Detroit Pistons have agreed to a contract buyout, allowing Morris to hit free agency and sign with any team.

The Pistons are cleaning house this month, with Morris being the second player bought-out in the past week. Look for the nine-year vet to sign with a contending team, although his fantasy value could take a massive hit depending on where he signs.

Alex Burns - Hoop Beast20 weeks ago
Should I Trade...?
Do Not Sell
Are you looking to contact Customer Support about a subscription or account related question?
Yes
No, I'm a California resident looking for the California Consumer Privacy Act form