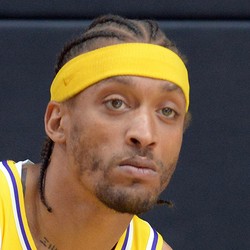 Michael Beasley has been released by Detroit in order to bring in newly-signed Joe Johnson.

Beasley should eventually be able to find a new home, though may have a more difficult time doing so with his five-game suspension kicking in after he signs a new deal.

Michael Beasley signed a one-year deal with the Pistons on Saturday.

Beasley will have to sit the first five games of the season after being handed a five-game suspension for violating the league’s anti-drug policy. He figures join the front court mix in Detroit and serve as the main backup to Blake Griffin. Beasley averaged 7.0 points, 2.3 rebounds, and 1.0 assist in 10.7 minutes across 26 games for the Lakers last season.

Michael Beasley is reportedly finalizing a deal to join Guangdong of the Chinese Basketball Association for the next two months.

Beasley began the year with the Lakers before being dealt to the Clippers at the trade deadline. The Clippers waived the forward and after no NBA club has picked him up, he appears to be headed overseas.

Brad Richter1 year ago
Michael Beasley going to the Clippers

Michael Beasley and Ivica Zubac have been traded by the Lakers to the Clippers in exchange for Mike Muscala.

Beasley continues his tour around the NBA. The 30-year-old forward will be playing for his eighth team unless he is released by the Clippers. He is not worth fantasy consideration even if he does stick with the Clippers for the rest of the season.

Michael Beasley went for four points, five rebounds and one steal in 10 minutes of floor time on Tuesday.

Beasley only saw 10 minutes after getting 26 the night before, expect him to fade back into irrelevance.