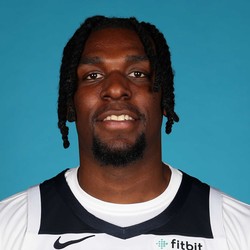 After taking 10 or more shots in his previous five games, Reid found himself limited to only eight this past Tuesday. He played a total of 23 minutes, the lowest of this month, and was unable to get anything going against the Rockets. His first three games of the month were explosive, with him putting up double-digit efforts on the board for all three contests. However, since then, he hasn’t been able to get back to that ceiling level of play that made him so valuable with Karl-Anthony Towns being out. Reid is still a great source of value; however, expectations should be managed as his output may not look the same from game-to-game.

Joel E. Ruffin Jr.3 weeks ago
Naz Reid continues to shoot in loss to the Pelicans

Reid continued to shoot this past Sunday against the Pelicans, however, failed to find his shot for the second game in a row as he shot 28.6 percent from the floor and zero percent from beyond the arc. He hasn’t been as efficient in his play lately, which has undoubtedly impacted his fantasy value. However, his high usage and volume make him a valuable fantasy asset to have at this time, especially with Karl-Anthony Towns out of commission. Reid is a must-own and must-start in deep-league play, but if he is unable to contribute to all stat categories consistently, it may be best to pay more attention to the match-up to evaluate if and how he will produce value.

Reid was able to extend his streak of double-digit scoring to three as he scored 16 points against the Magic this past Friday. He continued to play well in his expanded role and continues to provide value to all fantasy owners. Even though his consistency and efficiency can be called to question at times, he should be owned in all fantasy formats until his play proves otherwise.

Joel E. Ruffin Jr.3 weeks ago
Naz Reid drops another double-double in win against the Bulls

Listen, this man should change his name to “Money Man Reid” cause he’s “cashing in,” taking advantage of his opportunity with Karl-Anthony Towns out of commission. Since having his first taste of “Double-Double” success, it seems as though he has built up a liking to the experience and decided to post another double-double performance in back-to-back games. In his last 10 games, he has averaged 21.3 minutes of playing time, 8.8 field goals taken, 2.6 three-points taken, 6.2 rebounds, 1.2 assists, and 10.1 points per game. In watching his last three games, it has been encouraging to see what he has been able to do in under 30 minutes of play. His efficiency is a nice aspect to his game, and it should greatly benefit his level of production even when Towns returns. It is important, however, to put his recent success into context. His last three games, although impressive, have not been common when considering his entire body of work. Even though at this point in the season, he is a must-start, it would be best to monitor him closely evaluating the best matchups to deploy his talents in your starting line-up.

Reid was terrific once again tonight, notching his 2nd consecutive double-double. In his last three games, Reid has averaged 12.7 points, 12.3 boards, 2.7 assists, one steal, 1.3 blocks, and only 0.3 turnovers in 26 minutes per game. He should continue his production and is worth a roster spot on most fantasy squads at this point at least until Karl-Anthony Towns were to return (if at all).