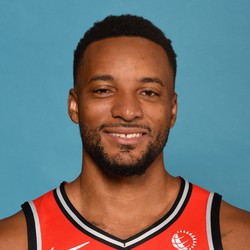 Norman Powell (ankle) had to be helped off the floor during the first quarter of Monday's game against the Jazz with a left ankle sprain and will not return.

It was friendly-fire as Powell collided with teammate OG Anunoby. It didn't look good as Powell couldn't put any strength on his left leg as he had to be carried to the locker room. He was immediately ruled out for the remainder of the game. Patrick McCaw has replaced him on the court.

Powell has been scorching hot over his last few games. He now has back to back 30 point games and has been providing great fantasy production. Powell should remain to be counted on by his managers going forward due to his great play recently.

Warriors fans were thrilled at the site of Stephen Curry on the court for their team after missing 58 games this season due to injury, however it was Powell who stole the show tonight dropping a career-high 37. He’s been shooting lights over his last three games, averaging a whopping 29 points (30-52 FG) in 39 minutes per game. He’s doing this without Fred VanVleet in the lineup, however, we’d expect Powell to potentially stick in the starting lineup for Toronto given his recent production.

Powell has been filling in nicely for his injuried teammates recently and has been providing solid fantasy value. He has dealt with injuries of his own this season but when he has been on the court he has produced. Powell should be started in most leagues going forward.

Powell has been leaned on heavily over the past two games, averaging 38.3 minutes on the floor and 23 points per game. Expect those numbers to go down when Fred VanVleet, Serge Ibaka, and Marc Gasol return.

Aaron Larson18 weeks ago
Should I Trade...?
Do Not Sell
Are you looking to contact Customer Support about a subscription or account related question?
Yes
No, I'm a California resident looking for the California Consumer Privacy Act form