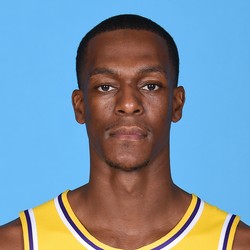 Rondo's seven assists were second on the team, trailing only LeBron James' nine. While he only scored four points and missed both of his three-point attempts, seven assists in 22 minutes off the bench is a good night for Rondo. He might not be producing enough on a consistent basis to be rostered, but he could be a useful last minute plug-in on some nights.

The Lebron James-less Lakers traveled to the Bay to face off against the Steph Curry-less Warriors in a game that lacked the star power this ticket packed in the preseason. Rondo slipped into the starting lineup in James's absence and failed to recreate his magic, scoring 12 and assisting on six scores throughout the night. Getting just his third start of the season, Rondo was a savvy DFS start in Thursday's lopsided matchup but was unable to take advantage of the opportunity. He'll be relegated back to the bench as James take the starting role back Saturday against the Grizzlies.

Mike Trudell on Twitter is reporting that the Lakers are starting Rajon Rondo tonight versus the Warriors in place of Lebron James due to a sore groin.

There was speculation that Alex Caruso was going to get the starting nod instead of Rondo but Caruso will remain the back-up point guard. Look for both players to have extended minutes tonight and be good starts for fantasy owners.

Rondo had his best game of the season in Monday's win, largely in part to an uncharacteristic 4-of-5 clip from beyond the arc. Only shooting 35.6% from deep this year, don't expect that trend to continue as it was the second-most three-pointers made in a game in the veteran point guard's 14-year career. While Rondo is averaging a respectable 5.4 assists per game this year, his 7.9 points and 3.4 rebounds per game make him most valuable on your league's waiver wire.

Rondo has scored double figures only three times in his last nine games. He is averaging 7.2 points, 2.1 rebounds, 5.2 assists and 0.9 triples during that stretch. Rondo is currently averaging career-lows across the board, and is only worth hanging onto in deep-league formats. The Lakers next scheduled game is Monday, home against the Suns.

Brad Camara21 weeks ago
Should I Trade...?
Do Not Sell
Are you looking to contact Customer Support about a subscription or account related question?
Yes
No, I'm a California resident looking for the California Consumer Privacy Act form