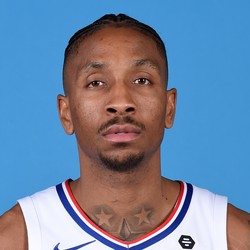 Rodney McGruder went for four points (2-4 FG, 0-2 3Pt), five rebounds, one assist and a steal across 22 minutes in the Clippers' 114-99 win over the Mavericks on Tuesday.

McGruder made an impact on the boards in the blowout victory, grabbing a higher-than-usual number for the fourth-year swingman and matching a season high in that department. He's been a regular part of the rotation this season, logging 16.5 minutes and putting up 3.8 points and 2.0 rebounds per contest. McGruder has put up double-digit points just once all season, and his rebounding numbers certainly don't jump out of the box score. He can be safely left on waivers, but you already knew that.

The minutes played and points scored were both season-high's for McGruder. The increase in playing time tonight can be accredited to both Kawhi Leonard and Patrick Beverley sitting out. If anything, tonight showed what McGruder is capable of if given extended minutes. With the Clippers load managing their superstars and Landry Shamet out indefinitely, McGruder is a name worth keeping an eye on. For now, he can remain on the waiver wire, though.

Rodney McGruder (ankle) is available to play Wednesday against Utah.

McGruder will make his season debut when the Clippers face the Jazz Wednesday following a four-game absence to start the year. With Kawhi Leonard ruled out, McGruder could have a larger role in Wednesday’s contest.

Rodney McGruder will miss the Clippers' season opener while dealing with a right ankle sprain.

McGruder's absence should free up some minutes for Mo Harkless behind Kawhi Leonard. The Clippers' next game is Thursday against the Warriors.

Zachary Hanshew13 weeks ago
Rodney McGruder claimed by the Clippers

Rodney McGruder has been claimed by the Clippers on Tuesday after being waived by the Miami Heat.

McGruder is not viable for the postseason but could be in line for a wing bench role for them next season. He's off the fantasy radar.