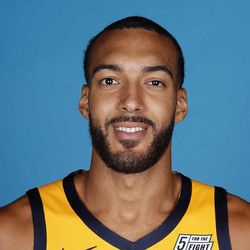 How things have changed in a flash from earlier today when we thought the NBA was going to make a decision soon to play games without fans in the arenas. The season is now being suspended indefinitely, and it is unknown at this time what plans the NBA and commissioner Adam Silver have for the future of this season.

Utah's game at Oklahoma City on Wednesday has been postponed.

The NBA has not made an official announcement to why the game has been postponed, it could be related to the ongoing coronavirus concerns. The contest was originally delayed, than ultimately postponed for a later date. Utah's next scheduled game is Friday versus the Pelicans while the Thunder face the Timberwolves on Saturday. No make-up date for Wednesday's game has been announced.

Rudy Gobert remains questionable for Wednesday's game against the Thunder.

Gobert's news should be monitored as there has already has been back and forth between coaches and beat writers whether he will play for sure. if he misses, this presumably means that Tony Bradley's minutes will be solidified. For DraftKings he is certainly an option at $3200, great for a large tournament or GPP type of play. Emmanuel Mudiay would be a contrarian, dart-throw GPP play but he has been utilized so little that it is hard to have any confidence in him. If you were playing FanDuel, be advised that Gobert locked into your lineup at 7:00 PM EST.

Rudy Gobert did not participate in Wednesday's morning shootaround and is listed as questionable to play against the Thunder.

Gobert is averaging a double-double as one of the more reliable fantasy centers available. If he's unable to go Tony Bradley and Georges Niang are candidates to see more minutes.

With Marc Gasol still nursing an injury, Gobert seemed primed to feast in the paint in Monday's matchup but was held in check with his worst scoring total since since October 26th, the Jazz's third game of the season. The reigning Defensive Player of the Year was enjoying monster numbers in December and January where he averaged 17.2 points, 14.9 rebounds, 2.0 blocks, and 1.9 assists. Since February started though, he's putting up just 12.9 points, 11.3 rebounds, 2.0 blocks, and 1.3 assists, dropping his production in every category. Gobert will look to leave this matchup behind him as the Jazz face off against the Thunder on Wednesday night.