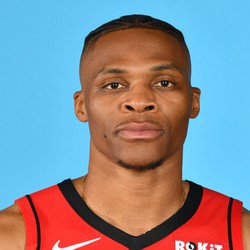 After being held under 50 percent from the field during the Rockets three-game losing streak, Westbrook was able to bounce back on Tuesday, knocking down 64 percent of his shots. He also made his presence felt on defense, chipping in four steals on the night. Despite the impressive play, Westbrook has committed 5.5 turnovers per game thus far in March and will need to do a better job at taking care of the ball going forward. The All-Star point guard will look to keep up his stellar play on Thursday as the Rockets travel to Los Angeles to square off against the Lakers in a prime time matchup.

Westbrook and the entire Rockets team struggled to get anything going against the Magic on Sunday, leading to the teams fourth consecutive loss. Although he led the Rockets in scoring and he was efficient from the field, his eight turnovers were the most Westbrook has had in over a month. The nine-time All-Star will look to help the Rockets get back on track in Tuesday's tilt against the Timberwolves.

Alex Burns3 weeks ago
Russell Westbrook (rest) out Saturday, will play on Sunday

Russell Westbrook (rest) will not play in Saturday's game against the Hornets due to rest purposes but will be available to play on Sunday vs. the Magic.

This is par for the course as the All-Star hasn't played in both parts of back-to-back sets all season. With Eric Gordon (knee) also ruled out, Austin Rivers and Ben McLemore are in line to see an increased role on Saturday. Westbrook will return to the lineup for Sunday's game against the Magic.

Westbrook may have not been as efficient tonight as had been over the last two months, but that did not stop him from tallying a monster double-double. Regardless, in a game where no other Rocket scored more than 17 points, Westbrooks was the only real semblance of a consistent offensive threat. He should continue his excellent play this Saturday against the Hornets.

Westbrook seemed to have suffered an injury to his foot within the games first few minutes, but never missed any action. The All-Star guard wasn't as aggressive as he has been throughout the past month but still came one rebound shy of a double-double. His stat line is certainly nothing to be ashamed of, but judging by his recent standard of play, Monday's game can be chalked up as an off night. Westbrook and the Rockets will enjoy two nights off before Thursday's prime-time tilt against the Clippers.