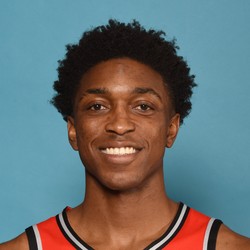 Stanley Johnson scored 6 points, (3-4 FG), and 1 steal during his 4 minutes of floor action on Christmas against the Celtics.

Johnson scored 6 fantasy points against the Celtics and is averaging 2 fantasy points on the season considering he has only played in 6 games. He remains a free-agent type player for fantasy owners.

Stanley Johnson remains out of the lineup due to a groin injury on Wednesday against the Clippers.

Johnson can be left on the waiver wire as he's basically out indefinitely due to injury. With Johnson and McCaw both out, Rondae Hollis-Jefferson is worth a look in deeper leagues.

Stanley Johnson (groin) is expected to miss about two weeks.

Johnson was ruled out for Monday's contest due to a left groin stress reaction. It was reported that he will miss at least two weeks due to the injury. Johnson should return sometime in the beginning of December.

Stanley Johnson saw his first action as a member of the Toronto Raptors in a 112-106 loss to Boston on Friday. He scored three points (1-2 FG, 1-2 3Pt) and added two rebounds in five minutes.

After receiving a "DNP - coach's decision" in the first game of the season, it doesn't provide the most encouraging prospects for a player's fantasy outlook. Coach Nick Nurse kept a tight eight-man rotation in the first game, and slightly diverged from that by having Johnson see the floor, in addition to his eight-man unit, against Boston. It's a sliver of hope for Johnson that minutes could be on their way, but it's not something for the fantasy community to concern themselves with.

Stanley Johnson has agreed to a two-year $7.5 million contract with the Toronto Raptors. The 23-year-old has an option on the second year of the deal.

In the wake of the massive loss of Kawhi Leonard, the Raptors made quick work in trying to put some pieces back together, starting with the signing of Johnson. There are certainly minutes to be had now in Toronto, especially when you consider Danny Green was also lost on Saturday, so the former 8th overall pick will have a decent shot at jumpstarting his career in a pretty interesting situation. The Raptors have been a top-five team in defensive rating in each of the past two seasons, so Johnson's abilities on that end of the floor suits their style well and could result in him earning some solid playing time.