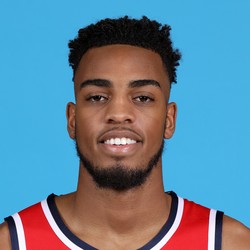 In a recent Q&A with subscribers of The Athletic, Wizards G/F Troy Brown Jr. said he wants to work on his 3-point shooting, lateral quickness, and his ability to guard small point guards.

The second-year combo G/F made significant strides in his sophomore campaign with the Wizards, averaging 9.7 points, 5.3 rebounds, 2.3 assists, and 1.2 steals in 25 minutes per game. Listed at 6’6”, Brown Jr. is naturally more of a shooting guard or small forward, but says that he wants to expand his defensive ability to enable him to keep up with defending the other team’s smaller point guard. Wizards point guard John Wall has been on the shelf since 2018, and maybe Brown Jr. sees his improvements in that aspect of his game as an opportunity to garner more minutes. Look for him to continue to improve his game year-over-year, and eventually become a player that can provide consistent fantasy value.

While Brown's scoring has been a mess in the early going of March, he's quietly gotten a grip on his rebound numbers, finishing between four and six grabs in each of his last six games. Obviously it's still far from ideal, as the 20-year old was producing upwards of 7-8 per game when at his peak this season, but it's a significant upgrade from the 3.1 per game he produced in the month of February.

It was far from pretty, but Brown took a solid step forward on Friday, scoring double-digit points for the first time this month with acceptable numbers in both rebounds and assists. At the end of the day however, as nice as progress is, Brown still needs an injury to return to fantasy relevance.

Brown's most rebounds since February 9th wasn't enough to stop him from another step back on Sunday as the sophomore was unable to score on any of his four field goals, his second time doing so in his last eight games. Brown showed big potential early in the season, but looks to be back down to a dynasty stash.

Brown was solid in the chances he did get but was once again held back by the depth chart, taking seven or fewer field goal attempts for the fifth time this month. The sophomore has shown promise earlier in the season but needs an injury or two before being fantasy relevant at this point.