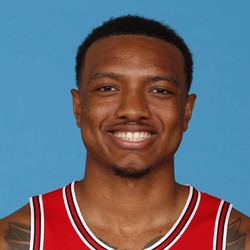 Six games into a return from an ankle injury that sidelined him for nearly two months and Carter Jr. finally cracked double digits. His rebound total was low, but banging in the paint with Andre Drummond is no easy task. Carter Jr. has been pretty quiet since the injury, averaging just 8.5 points, 6.5 rebounds, 1.2 assists, 0.5 blocks, and 0.5 steals. He has a much easier matchup than what he has faced over the last few games on Thursday. He should return to his double-double form against the Magic.

Dave Kluge17 weeks ago
Wendell Carter Jr. closer to playing with no restriction

According to Bulls' coach Jim Boylen, Wendell Carter Jr. is "moving closer to no restriction."

Carter Jr. has yet to crack 25 minutes since making his return from a high ankle sprain. Over three games he has only averaged 6.3 points, 8.0 rebounds, 1.3 assists, 1.0 block, and 1.0 steal over 22.1 minutes. Prior to the injury he was averaging 11.7 points, 9.9 rebounds, 1.2 assists, 0.9 blocks, and 0.8 steals over 30.0 minutes. Once he's playing full contests he's a nightly double-double threat. He'll have a tough matchup Friday against Myles Turner and Domantas Sabonis but is worth the $4,100 price tag in DFS.

Dave Kluge18 weeks ago
Wendell Carter Jr. does little in third game back from ankle injury

Wendell Carter Jr. recorded six points (3-6 FG), nine rebounds, and one assist, steal, and block over 25 minutes in Wednesday's 115-108 loss to the Timberwolves.

Carter Jr. has not been able to find his groove since his return from an injury suffered on January 6th. Over his three games back he is averaging 6.3 points, 8.0 rebounds, 1.3 assists, 1.0 block, and 1.0 steal. Last year's seventh overall pick was putting together a solid sophomore campaign prior to the injury, averaging 11.4 points, 9.8 rebounds, 1.2 assists, 0.9 blocks, and 0.8 steals per game. There's no reason to expect that a sprained ankle could be enough to derail that. Target him while his price drops in DFS as he's due for a big game soon. However, he will have to face off against a defensive nightmare, seeing Myles Turner, Domantas Sabonis, DeAndre Jordan, Jarrett Allen, Andre Drummond, and Tristan Thompson over the next three games. Temper expectations throughout that stretch.

Carter has played two games since returning from a long injury absence, averaging 6.5 points, 7.5 rebounds, and 20.6 minutes. He averaged 11.7 points, 9.9 rebounds, and 30.0 minutes per game before the injury, so you should expect to see his numbers climb closer to that range over the coming weeks. He's worth a speculative add for rosters in need of help at center.

This was Carter Jr.'s second game back since suffering in ankle injury in early January. Known as a double-double machine earlier in the season, he has failed to reach that mark so far. Still, Carter Jr. looked spry and healthy in Monday's game but struggled matching up against Boban Marjanovic's size. With Otto Porter Jr. back in the lineup and Lauri Markkanen nearing a return from his hip injury the Bulls might finally be at full strength within the next week. That should open up opportunities for the second-year product out of Duke as he will draw less defensive attention in the paint.

Dave Kluge18 weeks ago
Should I Trade...?
Do Not Sell
Are you looking to contact Customer Support about a subscription or account related question?
Yes
No, I'm a California resident looking for the California Consumer Privacy Act form