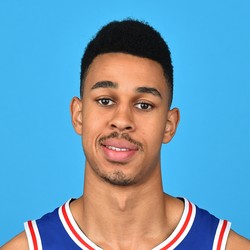 Zhaire Smith will miss Tuesday's matchup with Denver while dealing with a right leg laceration.

He sustained the injury while playing for the Sixers' G League affiliate Delaware Blue Coats last week and will not be available Tuesday. The second-year man has been back-and-forth between Philly and Delaware and has yet to make his NBA season debut in 2019.

Zhaire Smith scored 12 points in 12 minutes on Friday night, shooting 4-of-8 from the field. Smith also had three rebounds and one steal in the game.

Smith had a lost season in 2018 after playing only six games due to a Jones fracture and an allergic reaction that kept him on the shelf. Right now, Smith may have to settle for starting the season in the Sixers’ G League affiliate and work his way back into the rotation, as he has been outplayed and may be the odd man out. Therefore, Smith should not be rostered in any format at this time.

Sixers' rookie Zhaire Smith, who has been sidelined all season due to a Jones fracture in his left foot, will likely have to miss even more time than originally expected after news broke that a food allergy complication will set him back in his recovery.

Much like Joel Embiid, Ben Simmons, and Markelle Fultz before him, Smith will likely miss most, if not all, of his rookie season with the Sixers due to injury and/or medical reasons.

Zhaire Smith had surgery on Thursday evening to repair the Jones Fracture in his left foot.

Smith has decided to surgically repair the injury rather than letting time and rehab heal the injury. With that decision he could be sidelined for his entire rookie season much like teammate Ben Simmons who had the same procedure before his rookie year.

Zhaire Smith, the first round pick of the Sixers by way of the Suns, fractured his left foot at developmental camp in Las Vegas yesterday. The fracture is believed to be a Jones Fracture.

This is very unfortunate news for the rookie Guard. Zhaire Smith was looking to be an immediate impact player with his great athleticism. A Jones fracture is a tough recovery for basketball players, most notably Kevin Durant who struggled with foot issues for a while after. Smith is not a fantasy option as he could be sidelined for an extended period of time.