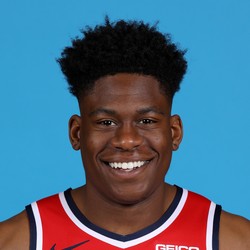 Admiral Schofield recorded one rebound and one steal across three minutes in the Wizards' 121-107 win over the Hornets on Thursday.

The rookie has now appeared in two straight after a short stint in the G-League, though he's logged just five minutes combined in that span. The Tennessee product remains a valuable dynasty hold, though he has next to no value in redraft formats.