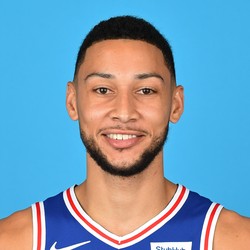 Ben Simmons (back) is progressing in rehab from a nerve impingement, but will be re-evaluated in three weeks.

Simmons suffered a nerve impingement in his lower back in late February. He is progressing, but will be evaluated in three weeks. Simmons is in danger of missing the rest of the season, and the 76ers could just rest him until the playoffs. He can be cut in re-draft leagues. Shake Milton will continue to see an expanded role and should be owned in all league formats.