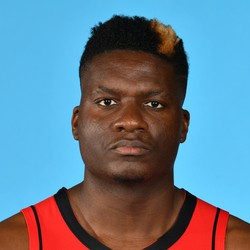 Hawks President of Basketball Operations and General Manager Travis Schlenk told ESPN, "Clint says he's feeling better, and there's a possibility that we can get him back on the court. Practicing and playing five games would be valuable to us."

Traded by the Houston Rockets at the deadline, Clint Capela has yet to suit up for the Atlanta Hawks. As the NBA continues to work out the logistics on which teams will be participating in the NBA Bubble, the Hawks are interested in making sure they are taking part, even if its for only five games. The Hawks youth movement and rebuild is underway and the nucleus of Trae Young, John Collins, Cam Reddish, DeAndre Hunter, and Kevin Huerter have yet to play with Capela. Fantasy owners should expect some regression from Capela as he makes his way back from injury and its unclear how he will fit with a new system and team. One thing is for sure, the pick-and-roll lobs will be there with Trae Young and Capela remains one of the better rebounders and shot blockers in the NBA. Fantasy owners will have to hang tight for more information about whether teams out of contention will still be involved in the restart of the NBA season.